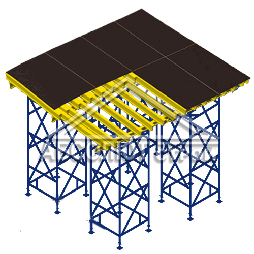 In modern urban policy, the question of resettlement is becoming ever more acute urban dwellers within the city limits. This issue can be solved by high-rise buildings built using monolithic technologies, with a one-time filling of high walls ( height of 5 m and above). Along with the formwork of walls, Absolut-Stroy Company offers one of the solutions to this issue - formwork of ceilings on volumetric racks. 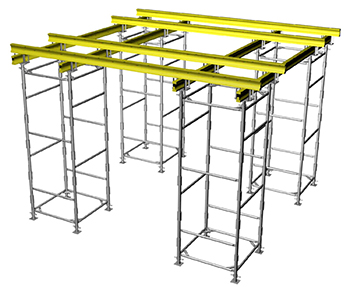 MAX height (from the installation horizon of racks to plywood) - 12 m;
MIN height (from the installation horizon of racks to plywood) - 1.5 m;
No vertical alignment needed;
The connecting unit provides a high-quality and durable connection of the crossbar and the vertical stand at an angle of 90 °. It is this connection that gives the entire structure such rigidity and makes formwork on volumetric racks unique in its kind;
A design feature is that two people can participate in the assembly process, and later, at the end of the initial stage of assembly, one person at all;
Another useful function of formwork floors on volumetric racks is that it can also be used as wedge scaffolding (not frame);
The average turnover of elements - 100 cycles;
The maximum turnover of elements - 200 cycles;

The basis of formwork on volumetric racks is volumetric racks. For fastening structural elements, special locks are used. The most widely used type of wedge lock, which can withstand heavy loads and gives the structure the greatest strength. Due to the design features of volumetric racks for formwork floors on volumetric racks, it can be placed around the perimeter. Screw stands make it possible to easily change the height of the formwork. It is easy to mount, dismantle and transport such formwork to other construction sites or a warehouse.